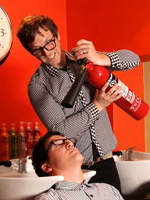 Vexatious Litigants are those in the community who use the civil court system to pursue petty issues and intimidate others, often out of nothing more than vindictiveness, at great expense to society and at little advantage to themselves beyond a feeling of “pay back” at someone.

The Vexatious Proceedings Act 2008 (“the Act”) significantly extends the scope of the vexatious litigant provisions and includes all proceedings in all courts and tribunals of all Australian jurisdictions. The test for the making of a Vexatious Proceedings Order (Section 8 of the Act) is whether a person has frequently instituted or conducted vexatious proceedings. The Act gives Judges the power to ban from their courtrooms anyone declared a vexatious litigant.

The members of the public can question if a person is acting vexatiously with the Attorney General. Where there is a real possibility that an application might be appropriate, the Crown Solicitor is instructed to advise on the merits of an application under the Act. After considering the advice of the Crown Solicitor, Justice Legal prepares a submission for the Attorney General with a recommendation as to whether proceedings should be commenced against the person and the nature of the orders to be sought.

Other relevant factors in addition to the criteria in the Act include: