Thank you. But how fit is your business?

Thank you. But how fit is your business? 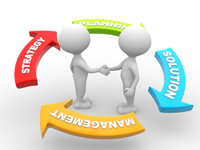 Firstly I must acknowledge and thank those involved in our achieving Finalist status in two categories of the Western Sydney Awards for Business Excellence, commonly referred to as the WSABE’s. It is with pride that I acknowledge nominations for both Business Ethic’s and Leading Business 2014. I suspect that by the time you read this the final results with have been made public and we will still be proud of our achievement regardless of the ultimate result.

Winning, in itself, though is something that we must be careful of. Winning normally means that you have run a race and scored a victory over your competitors. The true underlying issue however is, ‘Are you in the right race?’ In a reverse application of the old proverb, “What gets measured, gets done” if you are measuring the wrong thing, then what is being done has a high potential of becoming counter productive.

We were recently introduced to a potential client who when met was confident that they were actually winning most of the races they were in, there was one particular problem that was not insignificant, being a tax debt with an active Commissioner. Regrettably, this has become a common story these days. However aside from this one issue all of the other factors purportedly suggested that the business was both sustainable and recoverable.

A number of measures were in place and the statistics were proudly spruiked by the Director and the evidence was all there to prove it. Regrettably though, much of the measurement was of things that were important to the Director rather than the long term success of the business. As a consequence as we enquired further so as to appropriately formulate a strategy forward that would work it became increasingly obvious that the underlying integrity of the business was, to say the least, questionable.

What this now involves is the theoretic and systematic disassembly of what we actually have so that the actual existing components can be reassembled so as to determine if there is any combination that will provide a sustainable albeit smaller business. If this cannot be achieved then the simple alternative will be to break it up and dispose of the resultant components which, as always, will result in a significant loss of value.

It is therefore clear that it is imperative that you measure every aspect of your business regularly to ensure that you are appropriately on track. The above has been an immense shock to someone who walked in Balance Sheet solvent, but with a cash flow under strain. The reality in this instance was that the balance sheet was more of a dream, than a fact.

In businesses that are made up of humans (the majority at this point in time) we will often identify components or individuals that are in our business and that are not performing to the peak and we exercise a degree of leniency, it is a human thing to do. However when we identify a component that is not performing it is critical that you take time to sit down and look in detail at those shortcomings so that a rectification plan can be created. The next crucial thing is then to agree that failure to achieve the rectification plan has agreed and final results; and that should not simply be considered to be termination, it could mean transfer, demotion, relocation or some other productive result.

Once created it must be continually measured and monitored with an improving trend established early and then not only sustained but also increased. The minute a reversal occurs then the agreed final action needs to be taken. Failure to do so will convert the lack of performance into a cancer, and regrettably we have still not found a cure for cancer.