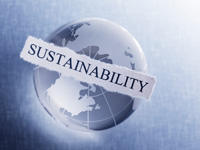 I have always considered that one of the key components to having a successful business is ‘sustainability’.  Late last year I was queried in relation to this because it was put to me that it was quite practical to set a business up for a specific limited period to deal with a specific situation.  Once it was over you took the profit and then moved on in search of the next venture.  My view is that the isolated activity is actually a venture, and that the business is actually that of running ventures of either or a similar or varying nature.  The fact that there may be gaps between each individual activity is irrelevant.  If you package the whole operation together there is still an opportunity that you will create something that will have its own intrinsic value.

Consequently I remain of the view that a business should be considered as something that is longer term and as a result the owner or operator must be focused on sustainability for its survival.  To this end one must monitor trends and movements both within and without of the business.  The accuracy of the information will obviously have a significant impact on the effective operation as we all know that decisions made with rubbish will in themselves be rubbish as well.

One of the key things that the business operator must be aware of is the marginal impact of change to their business.  This is often brought up when people start discussing interest rates, viz. an increase of 2% to a housing rate now would be considered serious but in the days when housing rates rose to almost 19% it would have verged on being acceptable.

Materiality is something that was ingrained into the auditors mind from day one, every decision to investigate something or not was based on materiality; although a very wise old accountant once told me that there is not materiality when it comes to bank account reconciliations, it either balances or it does not!  I have seen him proven correct on more occasions than I would like to think about.  Anyway back to materiality. The basic rule used was that if the issue at hand was more than 10% of the whole then it was deemed to be material, and if it was less than 5% it was deemed to be immaterial, correspondingly if it fell between the two then the auditor have to seek out additional information to determine how the materiality was actually determined.

Such analysis is not just reserved for profit or expenses or time but must be viewed in relation to the business as a whole.  In a recent programme I saw on the world’s largest metal recycling plant, which operates in the United Kingdom, they actually shut the machine down every second day to allow for repairs.  To use their words “the machine virtually eats itself as it works” consequently 50% is the material time required for repairs.  Clearly a random materiality of 10% would not work in such circumstances.

The more finely we tune our system, our business operation, the more finely we must reconsider our levels of materiality.  The original concept was on the basis that if something was say only 5 % then it was highly unlikely to have any real effect on the overall operation, and correspondingly something that was greater than 10% could possibly have a real impact.

With this in mind it is interesting to note the language that has crept into our investment sphere in these modern times.  If you were to take some form of traditional value approach then theoretically a movement of up to 5% should in essence be of little or no consequence, it would just be considered to be routine.

However over recent weeks when discussing the investment markets I have noted that people have been quoted as referring to a 1.0% downward movement as a “significant drop” and a 1.5% downward movement as a “plunge”.  It is amazing how times have changed, I remember being taught about the “plunge” in the market that lead to the Great Depression, and that reduction was something in the order of 30%!

What business owners need to note from this is that it is truly possible to be so finely tuned that in turn you are no longer sustainable.  I have often been told that $10 a week for the rest of your life is far more valuable than $1000 now.  I believe it.