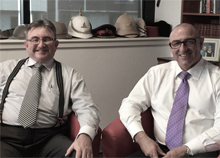 We read with fascination and some degree of exhaustion in this week’s financial press that the Prime Minister and his Government colleagues now miraculously plan to produce a soft budget in the upcoming month asserting that they now, quite amazingly, have the economy under control! Consequently it is management rather than radical change that is now the order of the day. In reality however as many will suspect, the predominant position may well be to reduce any future political fallout. The last efforts by the PM and his team have resulted in condemnation from multiple sectors, the outcome being that a large number of the previously ‘necessary’ measures introduced have been scrapped in the interests of saving political skin.

Business leaders look to the economy for clues and information. These clues provide the fiscal backdrop upon which decisions need to be made relating to the invest of new capital, employment or retention of staff or the spending of variable cash flows on marketing programs, training, etc. If the economy is false or artificial, then the decisions will either be wrong or quite possibly fatal certainly for the business, and subsequently, quite possibly, for the country.

As a result as we have seen with consumer confidence, economic uncertainty is a sure fire recipe for business to decide to sit its hands. This stagnation essentially pulls the economy back a gear until we can see clear signs and material clues to reconsider investment, expansion, etc.

We consider it fair to state on behalf of the health of the business community and therefore the country, we simply ask the whole of politics to consistently tell everyone the truth, and back it with at least some real fiscal foundation.  From what we all presently know, the following is a summary of some of the more salient factors that business is relying on:-

From all sides of politics the economy and the country just need some honesty, and have it applied consistently. Regardless of the conditions business can and will modify its strategy to suit, we just need to have some reality and a plan that fits the entire community both business and social so that there can be some real underlying growth.

In a speech to the American Chamber of Commerce, Reserve Bank Governor, Glenn Stevens, spoke about recent discussions amongst the RBA board regarding possible further interest rate cuts; however in his view the economy is not as bad as it might be. If this is actually Glenn Stevens’ view, then we get back once again to perceptions, confidence and economic clues so that business can get on drive growth.

The first political team to consistently provide clarity and not dysfunction on this issue may well just find themselves running the country.

Or, are we just on the wrong end of the rainbow?

Condon Associates Group provides 1 to 1 trusted specialist support for those in business distress.