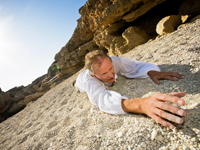 One can almost be forgiven for giving up reading all the information that keeps coming from every quarter about the state of the economy and its future performance. I certainly acknowledge that much of it can be divided into various camps ranging from the doom-sayers through to the frivolous opportunist who cannot see anything other than an ever increasing market and economy (in all areas) that will never fall or fail.

I must say of all my university subjects, and being an NSW Institute of Technology (now UTS) graduate there was quite a broad range of subjects that made up our degree, the economics subjects always left me with a sense of vagueness and generality that leaves an accountant with a bent for engineering to feel a little uncomfortable. In querying a lecturer about it at the time he said that he could explain it best with a story: –

‘Once there were three men who had been lost in a desert for some considerable time. The group was made up of a scientist, an engineer and an economist. They had not seen water in days, and the ONLY thing they had left between them was a can of beans. They had reached the point where if they did not consume the beans then there was a real chance that they would expire! The beans suddenly meant the difference between life and death. They sat there, weary, staring at the can trying to decide how to open it. It was the scientist who spoke first – “I’ll construct a specially designed small ditch in the sand with specifically calculated angled sides that will reflect the heat from the sun directly back onto the can and as it heats up the contents will expand and break open the tin.” This was disagreed with as all thought that the can would explode and the contents would be blown everywhere; lost and inedible. So it was next the turn of the Engineer, he said “I’ll scour the desert for two rocks. One rock to use as an anvil, and the other to use as a hammer, I’ll then hit the can until I’m able to brake the lid of the can off.” This too was denigrated as a failing course of action as they would no doubt expire before they found the rocks. With all ideas now exhausted the two expiring men turned to the economist to see if he could provide them with the course of action that would finally save their lives. The Economist, knowing now that it was up to him, their lives literally rested in his hands; he picked up the can of beans and studied it intently. He then turned to his two colleagues and said:-

“Firstly I’ll assume I have a can opener…”’

The studies of the future based on a series of assumptions provide a vehicle that enables a series of tests or comparisons to be made as to how a market may react to given influences. This coupled with prior experience enables, at least theoretically, some degree of predictability of the future.

With concern being highlighted by the Reserve Bank Board, CEO’s of Banks, Insurers and many others about the state of both our property and share markets I find it genuinely surprising that there seems to be little central effort being made to honorably come to grips with what is the new economy. I am yet to see or read anything comforting coming out of Europe with increasing references to more and more unemployment. With more and more work being off loaded overseas our own employment position is teetering. I was recently approached to act as someone’s mentor for a professional accounting body in exchange for an unpaid intern role. I offered the mentorship but not the unpaid employment.

Just as the early pilots who were attempting to break the sound barrier discovered that to pull out of a dive you pushed the stick forward not back; something akin to jumping out of a plane without a parachute! Just possibly our solution will rest with increasing interest rates rather than decreasing them. Zero interest rates in Japan have operated for decades and have realistically achieved nothing.

There is a real sense of a gap between reality and perception. I do hope that that gap does not become too great, as I am concerned that there is simply not enough parachutes to go round.

One thing though is certain, whilst the press and the media continually focus on the ego and the individual, rather than the country or the problem, there will be no real action by governments or their (our) leaders.

Tags: Editors Note, On The Beam