I note with fascination and a lot of frustration the current discourse on Tax Reform and the constant testing of the water by politicians of old and tired ideas on same, only to again find that most of the issues are, for our politicians, too hard to deal with!  Thus we then reach the point that we revert back to a state of self-imposed stagnation and ignorance.

It is now appropriate to discuss the elephant in the room which takes the form of the other side of the tax debate and pose the question, “why aren’t Australian businesses not making enough (or any) money to pay the necessary tax to run the country?

The government’s own ABS graph below clearly shows that from 2008 (the GFC) to today businesses (with the exception of miners) have maintained a steady decline in their investments in themselves. This is due to the fact that they see economic conditions so tenuous that they would rather accept a conservative status quo rather than invest in new ventures, technology or people. 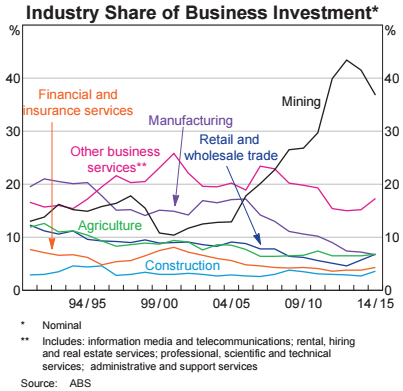 During the mining boom all of this was effectively masked; well as far as short term thinking governments were concerned it was. The sense of urgency seen from Canberra was like a faint puff of wind in the flapping economic sails, while ever the miners kept the tax receipts (and exports) coming all was politically good even though the majority of the business community had stopped contributing.

Fast forward to today and all of our worst nightmares have come true, the mining boom is over and our lack of forethought has caught us with our economic pants down. So now we choose to look at the lazy way out and tax easy targets such as consumers and not truly attempt to fix the economic structures that would see producers back paying tax, and making profits. (And paying dividends! Ed.)n

I am not suggesting that an increase in the GST is a good or bad idea, I am just saying that when you have ignored your own data to stay popular you/we wear the consequences. We advocate to all of our clients that the time to innovate is when you have the money and confidence and not when you are desperate.

Unfortunately the economy is not showing any material signs that businesses are about to resume producing profits and thus paying the correct amount of tax.  Further, I feel that we have an economy is three distinct layers.

The top layer … The big firms (top 100) who can manage their affairs with the correct advice and thus pay the legal minimum amount of tax obligations.

The bottom layer … small business who largely are self-sustaining, employ less than 10 people and make sufficient income to pay wages and not make a corporate profit.

The middle layer of business (the forgotten economy!) … that have struggled with an escalation in competition over the last 10 years off the back of a currency hit that let all and sundry in to compete, that cannot get a bank in the land to fund their investments and thus have such poor confidence that they are no longer willing to make material investments! Thus it is with painful admission that I acknowledge that we are back to economic stagnation.

So my hope as we approach a Federal Budget with a new Treasurer with a focus on innovation, is that we might actually move the debate away from tax and back to supporting profitable business growth. A plan should be an integrated plan and not just a rhetorical one trick pony. Elements of this must include innovation and investment incentives, funding options and tax.

If it is truly a great time to be in business in Australia it will take courageous and coordinated economic leadership and not just a one policy attempt to truly secure our business future.